Can You Coach Empathy? (Part 1) 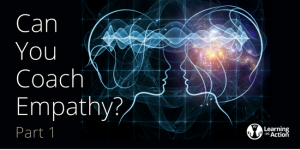 Bill thinks heâs empathetic. He doesnât show up to coaching sessions asking for coaching on empathy. Lack of empathy didnât show up in Billâs 360. Awesome, right? Not if you talk to his direct reports.

Billâs direct reports frequently describe in their coaching sessions with me how they go to Bill with concerns (too much work, not enough authority, not enough resources) or possibilities (a desire for more professional development, more staff, new title) and Bill responds with, “Do your job. Do it better. Figure it out. We donât have more resources.” His direct reports leave the meeting – which was for them, a tough conversation with their boss – feeling deflated.

Empathy is defined in different ways by different people. We at Learning in Action disaggregate empathy into its component parts, differentiate it from sympathy, and define it this way:

In short, empathy (accuracy + compassion) is what allows us humans to communicate, connect and relate with other humans. We humans have been neurobiologically designed to connect with each other through empathy.

Whatâs the business case for empathy?

Why should Bill care about whether heâs empathetic or not? Why is coaching Bill to be more empathetic implied in our coaching plan? Because empathy positively impacts outcomes. 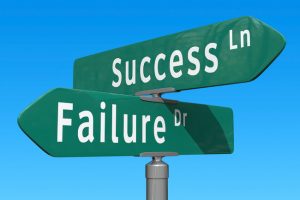 The research on empathy and its impact on performance and outcomes are compelling:

The impact of empathy on performance is staggering. But why? How does someone like Bill make sense of that?Simply put, a leader is only a leader if people follow. And people want to follow someone whom they feel understands them, cares about them, and connects with them. Â To move an agenda, a plan, a business, forward, Bill can choose to transact with his employees or he can choose to relate to them. The leaders who get the best outcomes choose to relate – using empathy.When a leader chooses to transact (engage with others without feeling, without caring), he/she may get the task done, but thatâs all. And the next day, they are back where they started. Or if they ticked off the people they rely on to get things done, the next day, they start behind the eight ball with a tougher task ahead.Â When a leader chooses to relate with others they work with, he/she does that through empathy, through shared thinking and feeling. They still get the task done, and yes, it might take slightly longer. But with that, theyâll have built a joint empathetic bank account with the people they work with, that can make everything that comes after, easier.Â Empathy has the effect of greasing the skids, making future engagement with others more frictionless, enjoyable, comfortable. As the research proves, empathy can actually allow us to get more done faster!Â As you can see, the business case for empathy (backed by research) is pretty dang convincing, no matter how you look at it. So, if being empathetic is so obviously correlated with strong performance and outcomes of all kinds, what keeps leaders from being empathetic?

What makes being empathetic so hard? 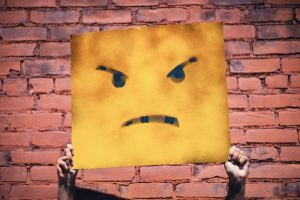 Being empathetic can be challenging for some people, all of the time, and for all people, at least some of the time. Here are a few examples of what can block or inhibit empathetic engagement:

All of these situations can create inner conflicts that make feeling empathetic a choice between Â Â Â Â the other person and yourself.

If you have a client who wants to be a better leader, wants better relationships with peers, subordinates, their boss, or wants to perform better, consider sharing this article as a conversation starter. Ask them about their understanding of what empathy is and how it can be used in the workplace. Then ask them what could get in the way of their being as empathetic as they might like. Last, watch for part two of this blog for Exercises to Increase Empathy.