What is Coaching? (And Who Is to Say?) 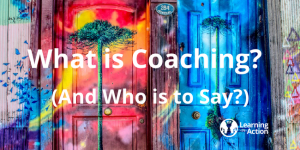 I have a client who, for a couple of years, I either wanted to, or tried to, fire.

Heâs a smart, kind, values-centric guy. Heâs always on time and usually quite prepared for our work. And he acts on what he says heâll do. Sounds like a dream, right? So whatâs the problem?

Iâve since determined that the problem was me. And how I was defining coaching.

Failing as a Coach?

My client, Bill, would start out each coaching session with the topics he wanted to focus on. He would move fluidly from one topic to another, sharing what he was concerned about, what he feared would happen, what he wanted, but felt sure couldnât happen. He would share his aggravations regarding his staff, his frustrations about finding good people, and the opportunities available to the company âif onlyââ¦

Bill didnât believe in setting a vision. âVisions are just fairy dust and pixies. Iâve got to work with reality.â Bill would systematically shoot down every possibility that arose during our sessions that had any hope of moving him forward.

And I would do what coaches do, ask questions, be curious, explore his feelings, assumptions, judgments, beliefs, his relationship to the situation, and mirror what Iâm hearing.

At the end of each session, Iâd ask the very coachy question, âWhere are you now relative to where we began today?â

Most days heâd say, âPretty much back where I started.â Ugh!

I left those sessions feeling like an utter failure as a coach. END_OF_DOCUMENT_TOKEN_TO_BE_REPLACED