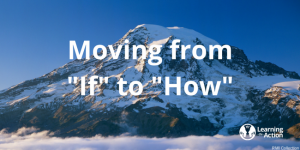 Iâd rather listen to this than read it.

It was 2:00 am, pitch black but for the twinkling headlamps of my fellow climbers on Mt. Rainier. Crampons on my boots, ice axe in my hand, inexorably tethered to a climbing team of four. Iâm scrambling up the aptly named,Â Disappointment Cleaver, despair creeping into my consciousness. This is where I learned the meaning of âhowâ commitment.Though Iâd trained hard and felt great on the climb the day before, I was laboring mightily in the higher altitude. (Guide, RMI owner and mountaineer,Â Peter Whittaker, told me later I wasnât breathing properly. Ugh!) While we charged past other rope teams, I felt as if I was barely hanging on, Iâd never been so completely spent. (What made me think this was a good way to celebrate my 50th birthday?!) END_OF_DOCUMENT_TOKEN_TO_BE_REPLACED

How Do You Shift from a Feeling of âHave Toâ to âGet Toâ? 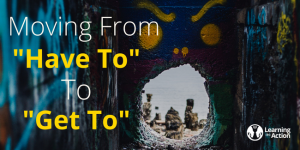 And I wasnât ready. Ugh! And I was tight as a drum.

I explored the experience with my coach afterward. She asked âWhat had you choose that response?â It was fortunate that it was a video coaching call, because I kinda wanted to slap her. ð

I responded, âWell, I suppose I did choose that response, and it certainly wasnât an intentional choice.â

What became clear after our exploration was that my tightness and rigidity was being driven by the story I was telling myself. It was a story of âhave tos.â END_OF_DOCUMENT_TOKEN_TO_BE_REPLACED