Your Responses to ‘Does the Client Really Have All the Answers?’ 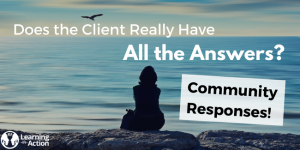 We received dozens of responses to our blog post âDoes our client really have all the answers?â and weâre grateful to everyone who openingly and honestly shared their thoughts with us.Â It is clear that this is a juicy question at the forefront of coachesâ minds, your minds. So juicy and important, in fact,Â we are working to provide time and space to further this conversation via a webinar platform. Stay tuned, details to come.Â  Â

Did you miss our initial blog post? No problem, you canÂ get caught up here.Â It turns out, our coaching community has been mulling over this hot button topic of whether coaches should advise their clients or not. And while this topic seems to be at the top of mind, the conversation around it takes many different valuable shapes and forms. With hopes of continuing this important conversation we are sharing a summary of your valuable perspectives.Â

Do You Coach Outside of The Lines?Â

Overwhelmingly, you answered YES. Â You regularly reach beyond the traditional co-active approach by: Â 1) doing what works for the client with recognition that all clients are different, which calls for a unique approach for each 2) doing what the client hired you for by coaching (mentoring, advising, and educating) them to improve performance, attain goals, and achieve their defined results (whatever they may be) and 3) holding your clients creative, resourceful, and whole – while warning and advising Â them if there is a cliff ahead.Â

END_OF_DOCUMENT_TOKEN_TO_BE_REPLACED

How to Price Your Coaching 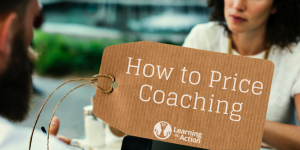 How to Price Coaching

Having met and gotten to know hundreds of coaches, Iâve come to believe that many of us suck at valuing ourselves. Personally, I find myself alternating, in equal measure, between the belief that I should be charging more and the belief that Iâm charging too much already! Â And idea of talking to other coaches about how much they charge for coaching just feels so taboo.

My belief that I should be charging more comes from my experience of just how challenging it can be to make a living coaching. (BTW, a huge percentage of coaches donât make a living coaching. According to the 2016 ICF Global Coaching Study, on average, US coaches made $61,800/year. And unless you live in South Dakota, thatâs simply not enough to thrive on.) Iâve coached full time (meaning as a focus for my career, not coaching 40 hours/week) for almost 15 years, have logged over 5,000 hours of paid coaching, completed three coaching programs, (two through Invite Change and one through Adler) and attained the PCC coaching credential (MCC proves to be elusive for me), and though Iâm making a living, I feel that in any other profession (attorney, accountant, consultant), Iâd be making a LOT more money for my level of experience/education/ability.

My belief that Iâm charging too much already comes from this horridly guilty feeling that âOMG, what could I do in an hour that would be worth that?!â (Yup, Iâm one of those coaches that sucks at valuing myself.) Logically I know that the value I create for my clients can be significant and meaningful and is, in essence, priceless. And that doesnât keep me from having some emotional baggage around my pricing.
END_OF_DOCUMENT_TOKEN_TO_BE_REPLACED

Coaching Outside the Lines 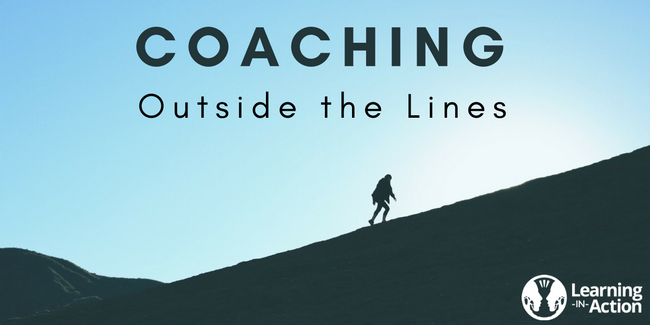 Even though Iâve been coaching for 15 years, I still sometimes ask myself, âAm I doing this right? Do I have permission to do this?â Â (No doubt, thatâs my doubt showing up.) Â And yet, when I look at theÂ Worldâs Top 30 Coaching Professionals for 2017,Â itâs clear, to me anyway, that they didnât ask anyone for permission. Â And apparently, they didnât ask the question âAm I doing this right?â Instead, they opted for figuring out what was right for them and did it. Â (And of course, wrote a book about it, got it published and successfully promoted it â which is nice. 😊 ).

The Secret Sauce of Coaching

I donât know what âMy Wayâ of coaching is, my âsecret sauce.â Â And I sincerely respect (and am somewhat pissed off by) people who do. Â Â I barely understand my way of coaching well enough to do it, much less write a book about it. Â That said, I donât believe there is any ONE secret sauce of coaching. Â Thereâs a secret sauce we make for and with our clients. Â Perhaps if we each could figure out the recipe for our own coaching sauce, we each could bottle it and sell it. Â And what feels important is that we coaches create that secret sauce with our clients in a way that brings out not only the best in them, but the best in us, as well. END_OF_DOCUMENT_TOKEN_TO_BE_REPLACED

Does the Client Really Have All the Answers?

Iâve been wrestling with this question for some time. Â Must I only ask and never tell? Does the client really have all the answers? I recently completed aÂ courseÂ intended to prepare me for MCC. Â While it truly transformed my understanding of coaching (from an ICF perspective), I also found it frustrating. Â When I tried this more MCC âlike approach with my clients, many just didnât want to play along. Â (Likely because I had âtrainedâ them to expect something different from me). Â All the same, when I recently surveyed my clients about what works about our coaching and what they wanted more of from me, the comment most frequently made was âTell me what you think!â

Does only asking questions work?

I attendedÂ the Institute of Coaching conferenceÂ in Boston a couple of weeks ago and had the opportunity to get up close and personal with few high profile coaches to ask them this question. Â Â Â I spoke withÂ David Peterson, head of coaching and leadership for Google and asked him, âHow much do you believe the idea that the client has their own answers?â Â He responded âIf you didnât know where the bathroom was and said to me, âI want to figure out how to find the bathroomâ, am I going to ask you how you feel about it, or why you want to go to the bathroom or what finding the bathroom is going to give you? No! Â Iâm going to tell you where the bathroom is!â Â This pretty much summed up what I heard from a number of coaches who attended this very academic conference, focused on the research and study of the efficacy of coaching. Â

Also, I had the opportunity to spend a day in a small group withÂ Marshall Goldsmith. Â I asked Marshall point blank his stance on the efficacy of the classic ICF-style approach of mainly just asking questions. Â His response: âThere is no scientific evidence of any kind that proves that approach to coaching works. Â Mine works. Â I have decade of proof that it does.â Â BTW, Marshall requires all his clients sign a contract saying that theyâll do exactly what he tells them to do. Â Neat job if you can get it. 😊 END_OF_DOCUMENT_TOKEN_TO_BE_REPLACED 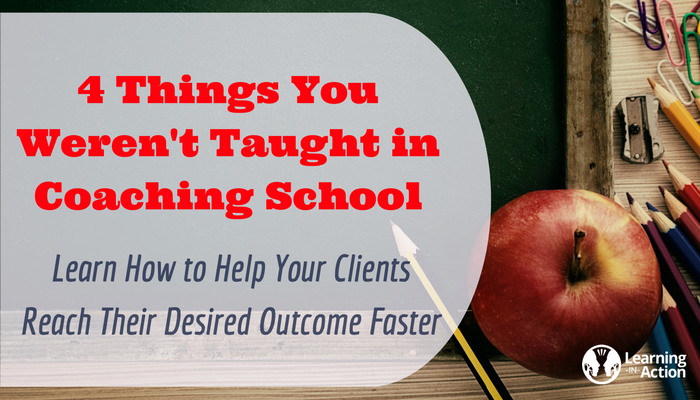 Do you know the book, All I Really Need to Know I Learned in Kindergarten? It’s a marvelous book written by a Seattle-area author. I wish I could write the same book about coaching school, All I Really Need to Know About Coaching I Learned in Coaching School. However, after 10 plus years of coaching, I’m realizing how much I didn’t learn about coaching in either of the two certified coaching programs I completed.

While I really could write a whole book about what I didn’t learn about coaching in school, I’m focusing this article on four key insights I’ve gained only from thousands of coaching hours, much of which has felt like trial and error. I’m hoping these four key concepts that coaching schools don’t emphasize will help make your learning curve steeper than mine was! END_OF_DOCUMENT_TOKEN_TO_BE_REPLACED