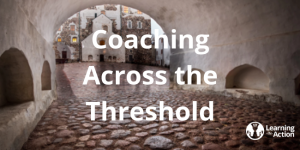 If youâve been following this blog, you know that for the last year, Iâve been part of Dr. David Drakeâs Narrative Coaching Program. While Iâm still very much getting my Narrative Coaching legs under me, itâs already brought a sense of ease, spontaneity and play to my work with coachees.

First, a bit of background on my coachee in my case study, John, and our work together.

John is the CEO of a 2nd generation family business. John and I have worked together for about 12 years. Our work has covered business, personal, professional, social, philanthropic – pretty much every aspect of life.

Some background on John thatâs relevant to this coaching session:

John loves to travel and has traveled with his family all over the world. Heâs less able to travel now because of his familyâs health challenges.

Johnâs wife is in the final days of treatment for her 2nd battle with cancer. Itâs been an extraordinarily difficult time, for both of them. They have differed on the ideal approach to her treatment, creating some tension in their relationship.

John has had, for many years, a keen fascination with personalized medicine and is quite educated on many aspects of health, science, medicine and wellness.
Johnâs mother contracted a degenerative disease which ultimately took her life when John was young. His mother and father disagreed as to how to approach her disease, and that impacted their relationship.

Frankly, it wasnât until I wrote this case study that I recognized how salient this last point was.

The Coaching Space and Field

John showed up for our coaching session worn down and worn out. Heâd been traveling and his work had heated up while his duties at home had expanded to include chores his wife usually performed. His wifeâs cancer had taken a physical and emotional toll on them both.

John was traveling and our coaching session was via phone. My sense was that he was in a quasi-private space initially and then after about ten minutes, he moved to a more private space. This was reflected in our conversation. Early on, John was tentative and stayed at the surface. Ten minutes into our conversation, he was connecting deeply with himself.

Over the course of the conversation, the field changed dramatically. Initially, the field felt tentative, surface. Then it shifted to heavy, burdened, untethered. Then, as John connected more fully to himself, the field held trust, vulnerability, and courage. Towards the end of the session, the field held discovery, possibility and wisdom. We flowed through an emotional journey, supported by the trust in the field.

In retrospect (and perhaps even in the moment), I sense that I shared too fully in Johnâs feeling of being simultaneously burdened, untethered and discouraged. (I was feeling that in areas of my own life.) Thus, at times, I feel that there was too much of me in the field. (A strong case for the classic coaching maxim, âYouâve got to do your own work before you can help your coachee with theirs!â) 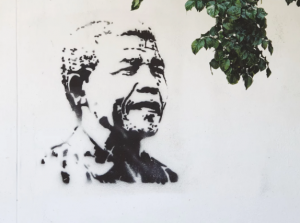 Stories, Their Characters and My Roles

John told a specific story about taking a trip by himself to recharge his batteries, and coming back feeling empty instead of nourished. Only in hindsight am I recognizing that the main character in the story, besides John or his spouse or family, was Nelson Mandela.

I played the roles of empathetic friend, listener, witness, fellow life-traveler, Story Sherpa â the advocate for the whole story.

The following is a high-level overview of the essence of the coaching session by Narrative Coaching (NC) Act/Phase. My primary intention with this session was to get more comfortable coaching in the Four Act structure.And in hindsight, I was so focused on working on the structure, I missed some pivotal opportunities to explore story and characters.

Below, I share the key questions I asked in each phase, what was explored, the threshold moment and my hindsight (what I see now that I didnât see then).

I suspect when you read this, it will feel a bit like a caricature, which I suppose it is. It is the summary of the key lines of the coaching session that gave it shape. A lot more was going on, so this is only to give you the essence.

Also, if youâve been coaching for any time at all, you might read this and think, âWhatâs the big deal?â And perhaps there is no big deal, except that the impact on me and my coachee was profound. We traveled an enormous distance together, very quickly. And we did it without goals, or contracts or agreements, and in a manner that was natural and organic.

When the conversation started, John stayed at the surface, so I asked:

Alison: Â âHow are you really?â

This dropped him into himself and he told the story that became the backbone of the session.

John was wanting to take care of himself so that he could take care of his family. So he took a trip alone that heâd planned to take with them. (Family couldnât go because of health issues.)

John: Â âI came back feeling empty and alone. It surprised me. It wasnât fulfilling. I realize that Iâm more interested in a shared experience.â

(As much as I wanted to ask him what would be fulfilling, which I would have done before NC, instead I used the threshold to stay with his present moment experience.)

John: Â âI feel hollowed out. Itâs not what I want. Iâm not sure if what Iâm feeling is the effects of the cancer on our family or something deeper.â

John shared about his fears and doubts and uncertainties. About not knowing when to push and when to let go in his relationships with his wife and his kids. About feeling impatient with himself and his life. (I sensed this conversation was hard for both of us).

(I took the feeling of impatience as a threshold and moved to Shift.)

(I made a decision to explore âlostâ as a metaphor for this world traveler.)

Alison: âWhen you are lost, how do you usually find your way?â

John: âI can use nature and landmarks to orient myself and find my way. The sun, power lines, geography, terrain.â

Alison: Â âWhat might you use to orient yourself now?â

John paused for a long time and started a new story about Nelson Mandela and how heâd spent years in prison, much of that time in solitary confinement. And how he came out so wise and thoughtful.

John: Â âHe learned so much about himself.â

Alison: Â âWhat would you like to learn about yourself?â

Alison: Â âHow would you learn that?

John: Â âIâm not sure what my options are. I could find someone to help, like a therapist. I have trepidation about that. I could spend more time reading and journaling. that resonates. I can see this might be an opening, an opportunity for me to focus on myself.â

(Instead of nailing down the details of what he was going to do, like I normally would, I decided to circle the tree again.)

Iâll spare you the details and hit the high points here.

Alison: Â âWhat are you aware of now?â

Alison: âHow will you use that time?â

John: Â âTo grow into the person I want to become.â

(We were near the end of the session, so instead of exploring who he wanted to become further, I moved to Sustain.)

Alison: Â âWhere will you begin?â

John: Â âIâm going to start by beginning my exercise routine again. Weights one time a week and running two times a week. Iâm going to reflect and journal on what wisdom is and how I might become less reactive.â

By the end of our session, John had found himself and a path forward and was feeling a greater sense of self-agency. The energetic quality of the field was dramatically lighter and more positive at the end of the session than at the start. He started the session feeling like a prisoner to his situation. He ended it feeling free.

I tend to focus more on what I could have done better, and Iâm sure I must have done something OK to have gotten the outcome we did. These are my reflections:

2) Â Â Â Â Â Only upon LOTS of reflection on this session has it become clear to me that too much of me was in the field, not only because I was feeling somewhat enmeshed, but also because I feel the same way he does in some of my relationships.

3) Â Â Â Â Â I was so focused on the Four Act Structure, I missed some obvious opportunities to explore stories, metaphors and characters. And once the 4 S’s become more ingrained, Iâll have more freedom to explore what shows up organically.

Weâve learned in Learning in Actionâs EQ Certification training that objectively mirroring a coacheeâs experience without the expectation of response is an incredibly powerful awareness practice. In light of that, I sent John the case study I wrote up on our session. This was Johnâs response, in italics:

âYour description of âThe Fieldâ was spot on:”

“I might argue the last, thoughâ¦ your empathy helped me connect disconnected thoughts and synthesize a new path forward. Without that, Iâm not sure it wouldâve been as effective.

“Your idea about my Mom was interestingâ¦ itâs certainly possible, but I havenât been consciously aware of that. I have been consciously thinking about walking a mile in my fatherâs footsteps, though. He had a very difficult road to travel â with decisions and feelings I could only guess at before (and didnât very well). As always and especially as to this session, which I found deeply helpful, Iâm appreciative of you.â

John and I had a coaching session this week and he was a different man! He was energized, engaged and joyful. When I asked him what shifted about his experience, he said he went from âbeing steeredâ to âsteering.â And he attributed the shift to this session.

Of all of the second-guessing I do and the wondering if I make a difference with my coachees, it was nice to hear that the many hours Iâve spent in the last year learning a new approach to coaching, made a difference. Even if Iâm still on my Narrative Coaching Bambi legs.

P.S. Want to receive our blogs in your inbox?Â Subscribe to our Friday Conversations Blog.

P.S. As a coach, you know thereâs value in your coacheesâ stories. But do you realize how transformative those stories could be with your specialized guidance? Find out at our January podinar. Our guest is executive coach, speaker, author, and founder of the field of Narrative Coaching, Dr. David Drake. Interactive webinar Jan. 25, 11:00-12:00 PT / 2:00-3:00 ET. Â Register – free!