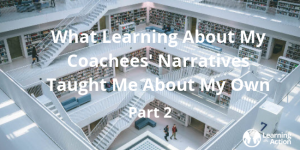 In my last blog post, I shared Part 1 of a reflection assignment due as part of the WBECS Narrative Coach (NC) Program with Dr. David Drake. In this Part 2, I share how what I thought I knew about coaching has been turned on its head by my experience with Narrative Coaching.

Five Assumptions about Coaching That Have Shifted For Me

What Iâve learned about coaching that Iâve had to unlearn (or assumptions I no longer make) include:

Even in the Advanced Coaching Program I took, we spent a great deal of time and energy around securing the coaching session agreement by checking the boxes of Topic, Desired Outcome, Meaningful Underlying Issue and Success Measure. And I bought into that at the time, and to an extent, I still do. Only now it feels more like an artificial structure placed on an organic process. (More on that below).

Now, instead of designing actions for the coachee to take after the session, we do it in the coaching session (as much as possible). (If you read Part 1, you know that this is a cornerstone of Narrative Coaching). Early on in my coaching, I did a lot of role play with coachees, but it was discouraged by my mentor coaches (not clear now why), so I stopped. Now, Iâm doing a lot more acting out, role play, experimentation during my coaching sessions so that my coachees can repeat/replay outside the session what they are experiencing and learning inside the session. (Hereâs an example of something I tried recently.) 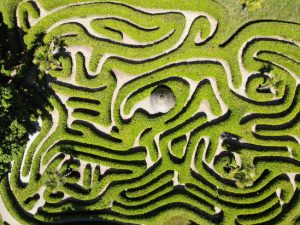 These days, I see coaching as the facilitation of an innately organic process. I believe that our coachees are all almost always, consciously or unconsciously, working to resolve what they bring to coaching (thatâs what brings them to coaching). And my role isnât to lead them down the path of questions that will ultimately get them to their answer. Â My role is to be present with them, see them, explore with them where they find themselves and then remain alert for the indications of where, why and how they are wanting to move from where they are to a new state of being.

But hereâs the deal: In my experience, not only do my coachees not consciously know what they want, they are often resistant to directly confronting the challenge ahead of them. And if I ask them where they want to go, they will often avoid exactly where their organic process is taking them. Â Â

So whatâs the answer? Â If we are not leading and we are not partnering, what the heck are we doing?

For that, youâll have to wait for Part 3 (and hopefully in the next week, Iâll figure it out). Â ð

P.S. Want to receive our blogs in your inbox?Â Subscribe to our Friday Conversations Blog.

P.P.S.Â Are there more blank spaces on your coaching calendar than youâd like? Join Chip Carter, Senior Advisor at the Institute of Coaching, and Alison Whitmire, president of Learning in Action, for Septemberâs interactive webinar of discussion and Q&A around your coaching capacity and how you can fill your calendar in a number of ways, including coaching for organizations who need you! Â Register here – FREE. Â Â Â